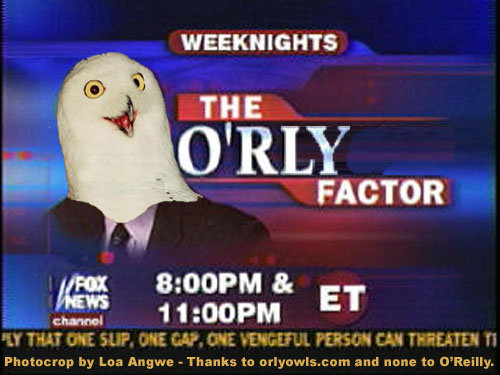 I’ve never understood why Bill O’Reilly, or anybody else in such a lofty position as he was in, would be so angry all the time. He’s just so combative. Maybe his rage was why he had such great ratings. Perhaps viewers of Fox News like watching angry people like O’Reilly, like they’re getting their madness out vicariously through him. Is this some American phenomenon I’m unaware of? Do Americans shoot their television sets like their king, Elvis Presley?

I wish I could do this.

He may even be angrier now that he’s no longer working at Fox. In fact, he’s now angry with the one guy you don’t want to cross: God.

O’Reilly has always been pissed off for one reason or another and got himself into heated debates many times over the years. Sometimes these “debates” were little more than quarrels or shouting matches. Nobody can deny these clashes were entertaining and you can rest assured they were great for the ratings. But my word, where does this guy find the energy to be like this all the time? You’d think Bill would’ve been living the life of somebody having had such a great job.

Here we see him blowing a gasket in the 1990s (viewer discretion is advised):

He really knew how to get under people’s skin, too. He nearly got David Letterman – a guy who seldom showed negative emotion – to lose his cool this one time.

He riled up some of the ladies on The View so bad that they even walked off their own show.

One time when he was the one being interviewed, he got upset that Fox – the company he worked for – was under fire for sexual harassment allegations… you know, as if a company shouldn’t be thoroughly investigated for this sort of thing.

In fairness to O’Reilly, when he got into a debate with fellow colleague Geraldo Rivera, it wasn’t just Bill that was behaving like a petulant child.

But how can anybody blame them? This video, like many others of theirs, was widely circulated just because of the clash of two strong personalities, and the politics and facts are clearly secondary.

The Americans truly are the kings of entertainment. They have so many love-to-hate personalities who deliver the news, they’re bigger than the news itself… that Keith Olbermann must be the smuggest man on Earth, regardless of political ideology. But I digress: O’Reilly is, was, and will always be great.

HLTN is intended as satire and its contents do not necessarily reflect the views of its authors.